The mission of the Rocky Mountain Quilt Museum is to collect, preserve, exhibit, and educate the public about quilts; honor quiltmaking traditions; and embrace the evolution of the art and craft of quilting.

The Rocky Mountain Quilt Museum was the dream of long-time Golden resident Eugenia Mitchell. She wanted her collection to be both seen by the public and preserved for the future. In 1981, a group of like-minded people came together, drew up bylaws, incorporated as a museum, and began fund raising for a site. In 1990, her dream became a reality with the opening of the museum at 1111 Washington Avenue in downtown Golden, Colorado, with Eugenia’s gift of 101 quilts from her private collection.

In 1991, the museum received its first grant from the Jefferson County SCFD. Using all volunteer labor and funds from this grant, a museum-quality storage system was installed. The museum has grown steadily since its opening in one room containing the exhibit, the gift shop, and storage. In July 2009 the museum and gift shop moved into the historic 1909 Ashworth Building at 1213 Washington Avenue. The 7,500-volume Sandra Dallas Library, the administrative office, and education department are located at 200 Violet Street in south Golden. 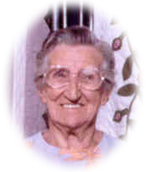 Eugenia Mitchell was intensely frugal and very creative, she was an expert at making do with what was available. Born in Brazil in 1903 to missionary parents, Eugenia grew up in Iowa. She moved to Golden in 1951 with her second husband, who died a few years later from a snake bite. Eugenia was a passionate quilter and a quilt collector who haunted thrift stores and antique shops in search of treasure. At age 80, she decided that her quilts should be preserved and seen by the public. A museum was needed. Sporting her trademark head-to-toe quilted clothing, Eugenia worked for nine years, holding trunk shows, giving lectures, teaching classes, and talking to anyone who would listen in order to acquire enough money and support to start a quilt museum. The Rocky Mountain Quilt Museum opened to the public in 1990 with 101 of Eugenia’s quilts as the foundation for the museum’s collection.

Eugenia remained active well into her 90s until Alzheimer’s forced her to enter a nursing home. She died in 2006 at age 103.

Today, thanks to Eugenia and the hard work of devoted volunteers and generous members, the museum has become a center for the local quilting community and a must-see destination on many a Colorado vacation. In 25 years, the museum has grown into a repository for more than 850 quilts and home to the 7,500-volume Sandra Dallas Library. Here now in spirit, Eugenia welcomes visitors from across the country and around the globe, and her dream of the Rocky Mountain Quilt Museum lives on as a cultural legacy.


Eugenia Mitchell Spirit Award
The Rocky Mountain Quilt Museum presents this award to a passionate, tenacious, and authentic individual who embodies and carries forth Eugenia’s vision.
Their steadfast loyalty to the museum has earned them this mark of distinction.

Membership has Benefits
Members gain free entry to exhibits throughout the year. Free admission to Sunday at the Museum lectures, discounts on gift shop purchases, and more!